THUNDER ON THE BUFFALO WATERFRONT

I have no idea if the waterway at Bflo Harbor or the Upper Niagara will even be open to boaters. Those bodies of water aren't part of the NYS Parks system. 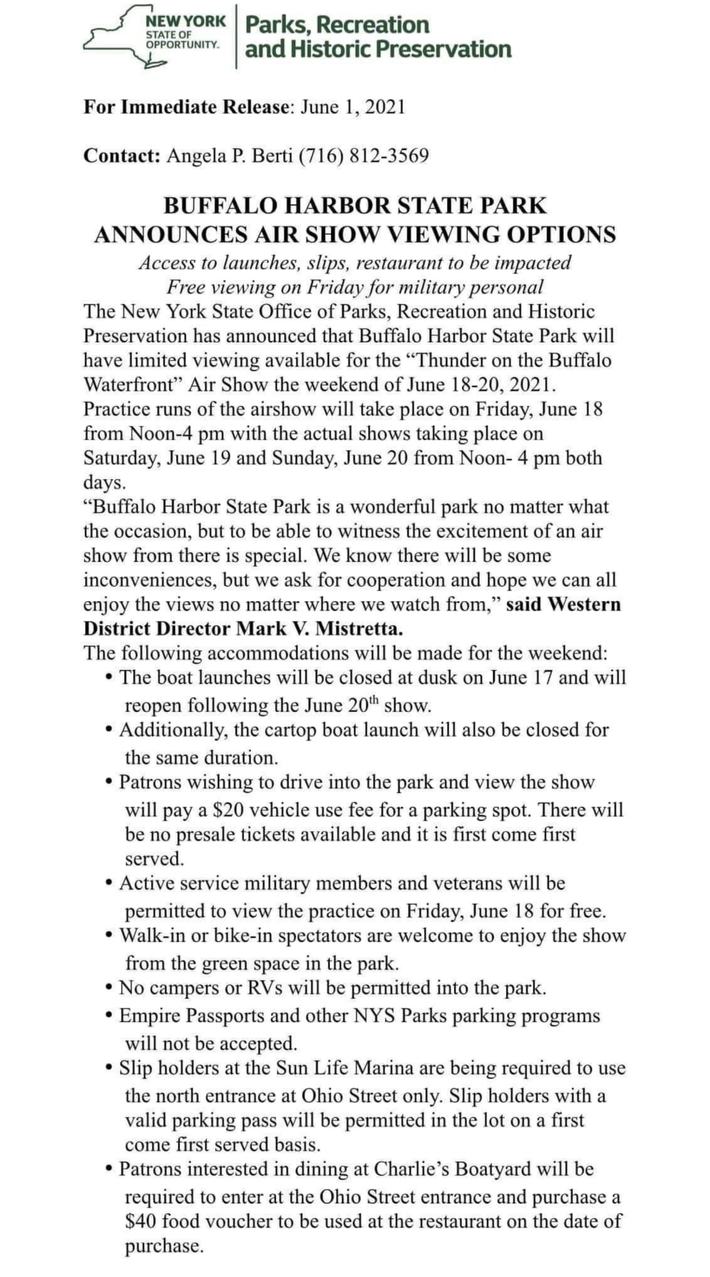 Looks like any daytime musky fishing will be out of the question.

Board Member Comment by Scott McKee on June 3, 2021 at 2:59pm
The USCG is calling me back tomorrow with an answer to if and where boats will be allowed to fish in the harbor and lake on June 19th and 20th.

Here's today's post that was on the WNY Walleye f/b site. I usually take a lot of posts with a skeptical eye:

and here's his explanation. I'll still wait for your word, Scott as the official one:

"A lot of questions are out for the boating community that want to see the upcoming Airshow by boat. Today the NYSP released some information to local marinas. I’m just clarifying here because I’m a fellow boater but also running the Airshow. So here it is, no boats allowed inside the red box which is the Airshow box. This must remain sterile from all movement in order to not distract the pilots performing the show which would be dangerous. The box will be enforced by jet ski and boat patrols from the USCG, NYSP, DEC, BPD and other local marine law enforcement agencies. No boats allowed inside the break wall from the small boat harbor to the inlet to the Buffalo river. Outside the show box west of the break wall will be fair game. This will be in affect Thursday June 17th - June 20th from approximately 11am - 4:30 pm. All marinas / boaters will be able to enter and exit with slight traffic modifications. For example, all boaters from the small boat harbor will have to enter the lake from the south of the marina. Even though the box shows a slight open area from the outer harbor shoreline to the red box, no boats will be allowed in there. If you have any questions feel free to drop them here. Otherwise pray for great weather, calm waters and I hope you all enjoy this unique opportunity to watch an amazing show from your boat. And to all that bought tickets and supported this event, thank you!!!!"

Board Member Comment by Scott McKee on June 7, 2021 at 2:39pm
Here's the skinny from the CG: The outer harbor and one half mile from the outer breakwalls into Lake Erie is closed on Saturday, June 19 and Sunday, June 20 from 11am to 5pm.

Comment by John Pensyl on June 7, 2021 at 9:12pm
A big "F" u to any yearly tradition musky anglers may have had. Atleast the border is still closed to limit where we are supposed to fish even more. I hope it blows 50mph both days. Planes will be grounded but ill still be fishing.

My sentiments exactly. No harbor. No west river. All the boats will be funnelled into the east river. Have fun. I'll be on and off the water early.

You need to be a member of The Niagara Musky Association to add comments!