I have written on numerous occasions about why I think Linus Van Pelt would have made an excellent musky angler.  He was willing --  eager in fact -- to forgo tricks or treats  with the gang and a Halloween party afterward  in order to sit in the cold waiting for the Great Pumpkin, despite the fact that all of his friends and relatives think he is an idiot for doing so.  Smitten by her Sweet Babu, Sally Brown spends the fruitless evening in the pumpkin patch with Linus, while missing out on all the fun.  Sort of sounds like Carrie and my musky season.

Once again my season, like so many times in the past, ends with a whimper and not a bang (or a rip for that matter).

With that in mind, here are my thoughts on late season musky trolling on the Niagara River and my seemingly endless failures in hopes of my own Great Pumpkin of a musky through the words of Charlie Brown and the true believer himself, Linus... 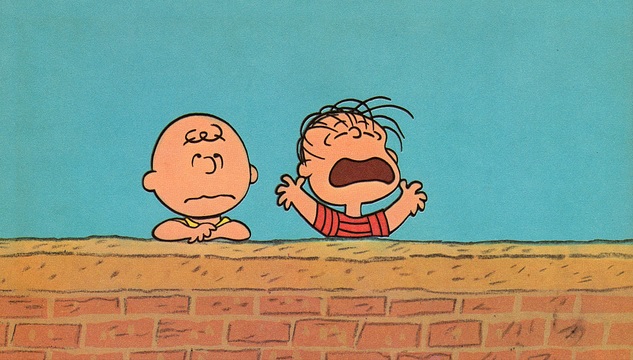 CB: Well another musky season has come and gone.

CB: I don't understand it. I went musky fishing and all I got was a bunch of dinks. I suppose you spent all week on the Niagara River - And the Great Musky never showed up?

CB: Well don't take it too hard.  I've done a lot of stupid things in my life too.

I was going to write about the muskie I caught down the east river to end the NY season but I can’t follow that..

Permalink Reply by Capt. Larry D. Jones on December 1, 2019 at 9:46am
Scott,After a whole November of no action in the Buffalo Harbor I decided to get everything out of the boat yesterday and get it covered before todays rain & ice.Sitting here at home yesterday thinking I should have got the last day in.At least you got out till the end and gave it all.I kept thinking Joe H. With all his persistence would come through,Congratulations to him and Andy!

Board MemberPermalink Reply by Scott McKee on December 1, 2019 at 10:36am
Carl, I am sitting here bored out of gourd, while dreading finishing the newsletter. Please tell us about your fish down the east river!!!