I told Carrie to put the kicker in neutral after I grabbed my rod. When I felt the heft of whatever hit my Musky Candy I started to get excited.  The slow, steady rip had given me an indication it might be a big fish. I was right for a change.  After some wide head shakes and a short run, we bagged her.

As I tried to determine which hook was stuck in her yap my heart sank a little.  The rear of the bait disappeared down her mouth.   I was unable to open her maw so I cut the rear hook hanger on my jointed Candy.  At least I was able to remove the lure from the net.  I grabbed the fish by the gill plate while she was in the net and her mouth popped wide open giving me easy access to the hook.  Out came the hook.

After Carrie took our picture I taped her at 49-inches on the nose.  As soon as I set her in the water she exploded down to the depths.

Well, my incredible, heroic, non-angling streak came crashing to a halt, but it was pretty fun landing a nice fish again.

The water clarity is perfect. The temps hovered around 46. The fish hit in UN2.

Out tomorrow in the suck.  Good luck, team! 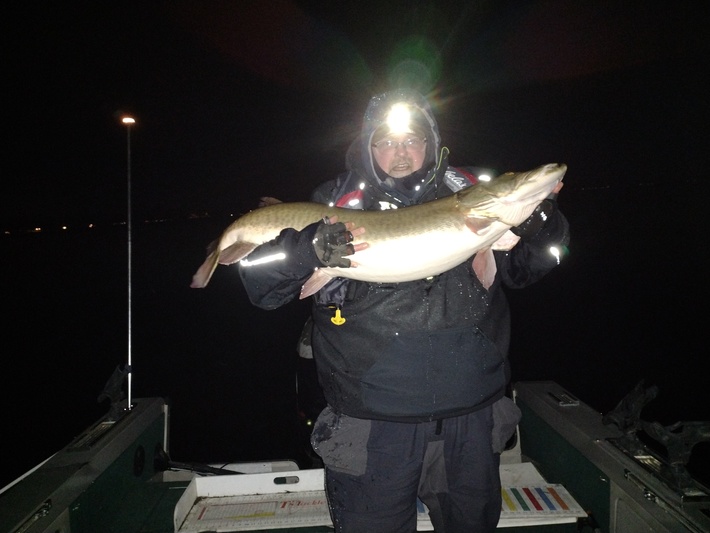 Board MemberPermalink Reply by John Pensyl on November 30, 2021 at 3:55pm
Yesssss!

I hate to say I told you so.....but I told you so.  Once you got the skunk smell off your boat this was inevitable.  JoJo take notice, you are next in line for redemption.

Well done Scott.  You earned this one and no one deserves it more.