Wed, Dan S & I decided to mix 'em up.  Instead of musky fishing the Cass starting in the morning, we decided on fishing 2nd shift.  Might as well.  Nothing else was working.

I got to try some tube flies that I had tied over the winter.  The one below got the follow & in the water it looks like a big bluegill.  Plenty of those in Cassadaga.  The lake is loaded with perch and bluegills.  "Match the hatch" for muskies??  It's tied on a plastic tube with a wire bite guard running thru the center which makes it almost feel non-existent when casting.  No wet socks with that fly.  It almost feels like you're casting only your fly line. 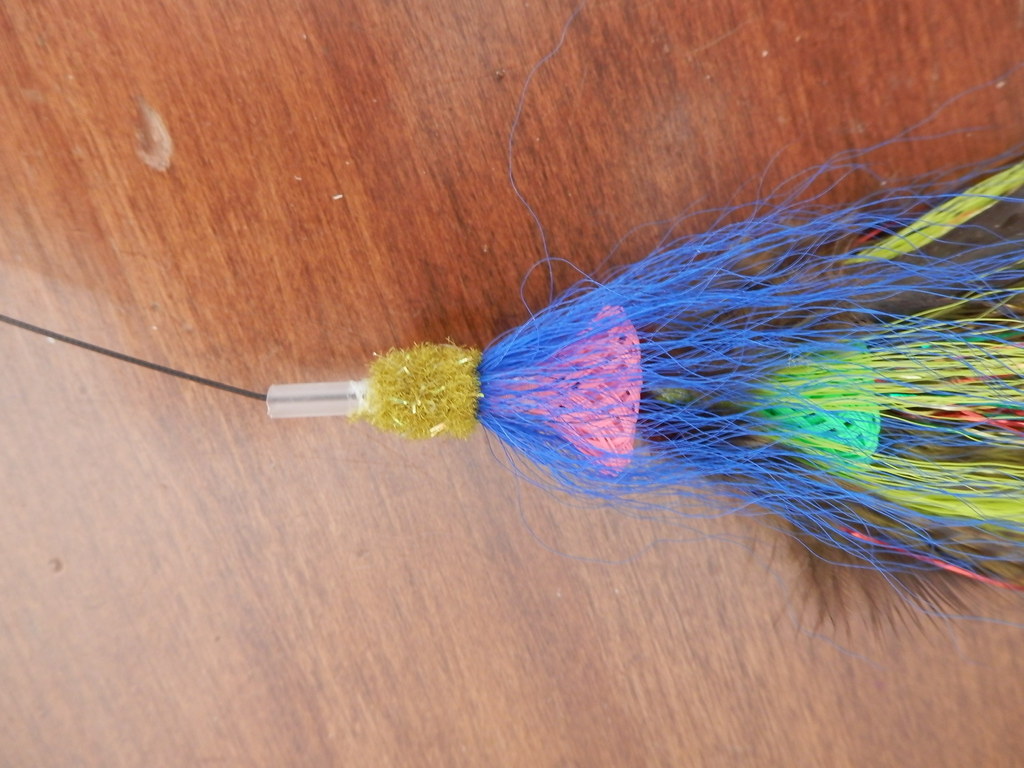 In the evening we found a good opening in the weeds in the lower lake.  Had three takes there.  When we left, down near the bottom of about a 25' hole, a vertical pod of bait fish about 2' high was holding.  Weeds had stopped about 12' down & they were in the open.  Right next to the pod was a hook that, if I was in Ontario, I would call a salmon.  It was that big.

Enough thrills for one day.  Seven takes and we're getting closer.  No musky fishing next week but the week after we're at it again.

Next Friday is the newsletter deadline.  If you want the cover, you'd better connect.  I know I'm pulling for you!

You're killin' us, Scott!!...not really.  Thanks for all the support from you & everybody else.  Here is an excerpt from a post that Steve Glassic put out from Lake Ontario United.  It's good to see the NMA getting some well-deserved recognition.

"Heron 1961, The reason I asked is because I know a couple of guys in the NMA who have caught the bug to catch musky on flies. They have raised a fish or three but have yet to hook up but they are bound and determined to succede. They even have somewhat of a fan club rooting for their success.

Funny that you mention the cover story.  Dan & I were just talking about the cover thing yesterday, I think just before one of his misses (ha! ha!). The cover talk must have distracted him.

You see those muskies thru the polarized glasses & you forget about everything else.  Going out on the fly is getting to be an obsession.  I wish I was available for next week but it just ain't gonna happen.

When I post a Discussion & the subject is "STOP THE PRESSES", you'll know we got one in the net.

Great fly John, you could definitely get more flare out of that tubing if you were interested. Search YouTube for "blane chocklett T-bone".  You have to stop into OOFS Thursday-Saturday. Nick ties almost all of his flies on tubes and Rick ties quite a few on tubes if I remember correctly.

Also, I made no comment on your fishing report because I am so upset I haven't seen that much action all season.

Riley...Thanks for the Blane Chocklett T-Bone" tip.  I'll check it out for sure.  I've tied articulated flies using the Fish Skull & the Blanes articulated system but as soon as I cast the plastic tube fly, it was like casting no fly at all. It was the 1st time I tried it & I really liked it.

You know how you can feel the difference between no fly (line & leader only) and the extra resistance you feel as soon as you tie a musky fly on?  To me, it's BIG & the difference was worth it as far as distance, resistance, & my getting tired out.  Dan S even tried one of the tubes & he couldn't believe the difference either.  I'll bring a tube fly for you at the next meeting.  Hopefully it'll get you a cover shot in the next newsletter.

I've been to some of Nick's tube fly tying demo's & I like to use them for steelies.  They can be really, really nice.  He's one, if not, the top guy in tube tying.

The other thing I liked a lot was the expandable sleeving (pink & green in the pic).  Nate Carr did that in Jan's tying demo at the OOFS.  You can see the sleeving but it allows for use of a smaller amount of deer hair while keeping the profile big & wide.  It will move a lot of water without reverse tying the deer hair (that's bulky).  The sparseness also helps it to sink faster & it won't hold much H2O either making it light & EZ to cast, unlike the wet-sock zonkers.

A musky might crunch the tube, but he77, I'll tie another if it will put one in the net!!!

I think part of the success we had Wed is that we talk to each other a lot while we're fishing (actually out B.S. each other).  Instead of a person getting frustrated solo, we can talk it out, like we did changing from 1st shift to 2nd shift.

Bottom line though is we still haven't put any in the net but dammmm are we close.

Rile...I studied the fly I posted & will have to work on getting more flare.  It seems that's the prob with a lot of flies.  They look good & big on the bench but look like a piece of spaghetti when wet.  The bends in the deer hair are from it drying out.

The am't of flare can be controlled by it's length before compressing & the amount that I "push in" the expandable tubing.  Next time I'm going to try a longer piece of tubing & push it in more.

I can also see that I'll have to tie the deer hair higher up on the pink cone.  That should also make it flare.

Tying these is a bit of a dilemma.  I'd like to make them with a big profile to move a lot of water & hold their shape while also making them light, sparse & not hold water.

it looks like I just picked out my winter project!

I have to take you up on your offer to fish in your boat soon. I feel as though I have a few things you will be interested in as far as flies and tactics go.

Riley...you hit the nail on the head with that!  There are probably more than just a few things I'd be interested in, there are a lot of things, I'm sure.

Since musky on the fly is all new to me, I'd like to learn everything I can.  And it's all leading up to that one from the Niagara.

I'm busy all this week so we'll get together after that.  Thanks much!

for sure. It seems as though I know nothing about finding fish in the Niagara so I wont be any help with that haha

Well, that makes two of us who know nothing about finding the fish but I've talked with & listened to a few people so I have an idea of where I'd like to concentrate.  I've been real good with theory so far, but a little lean on the realities.

I have figured out one thing though; that the Niagara fishing will be quite a bit different than Cassadaga.  At the Cass, we're in <10' of H2O, no current & casting into weeds, weed edges & tree stumps.  The cabbage is like 2'-3' below the surface, the exact opposite of the Niagara.

There is also the currents you will have to deal with. Scott, Scott and JoJo can probably help you identify some areas to concentrate on.

I can think of a few areas that might be good for you to try. The shallow edges of Thompson's hole and the shoreline flats and weed edges downstream from there to the international bridge. Weed edges along Grand Island up and down from the South Grand Island Bridge. Weed edges on east shore of the East River south of the bridge. Weed edges on both sides between Grand Island and Grass Island. Maybe the 10 to 15 ft range in UN2 upstream from Strawberry Island. In front of any of the creeks in the West River. When you are in currents, you will probably have to cast upstream or up and across current for a good presentation. And of course you will have to deal with boat control in the current and the wind.

Thanks much for all the tips, Steve.  Much appreciated.  That's an awful lot of things to think about when we're shadow casting but even that is starting to become second nature.  After 3,000+ casts, I've noticed that my casting & timing have improved dramatically.

Hopefully one of these days one of us will be able to post a pic of one in the net!